Stories from the Two Roads Project 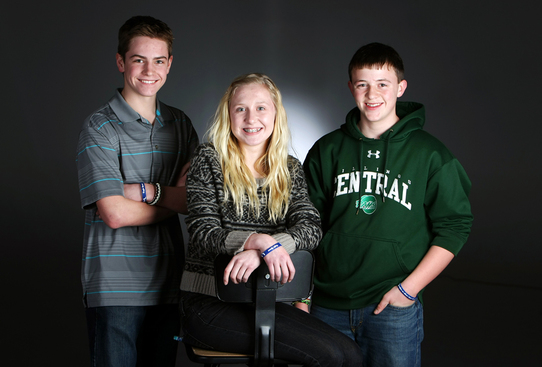 Eagle Mount-Billings began in 1988, when Greta and Bob Mathis – United States Air Force General – retired, began an adaptive ski program at Red Lodge Mountain Resort for children and adults with disabilities. They had already established the program in Bozeman, Montana in 1984, immediately so successful they wanted to expand to other areas. In time, the program grew to include arts & crafts, bicycling, summer day camps, equestrian activities and much more. The program also expanded to Great Falls, Montana.

Matthew Hayden, Maia Ragar and Logan Tracy from St. Francis Upper School in Billings, Montana, recipients of $100 bills to be used and expanded for good, thought Eagle Mount a perfect cause to help with their combined $300 from Global Doing Good, a division of Global Travel Alliance. As they visited, they decided they would try to multiply their funds rather than simply donate the $300 to Eagle Mount.

Through fundraisers, grants from local businesses and other activities, the students expanded their $300 into $5,210.75, enough to pay for 21 individuals to attend Eagle Mount Day Camp this coming summer. Maia Rager got things moving by organizing a screening of the movie, Polar Express last January.
Tracy Hayden used his $100 to have bracelets made for the rummage sale he was sponsoring. The bracelets featured the Eagle Mount logo from Isaiah 40:31: . . .but those who hope in the Lord will renew their strength. They will soar on wings like eagles; they will run and not grow weary; they will walk and not be faint.

Eagle Mount staff members were astounded; one observed, “We couldn’t believe these three raised this much money; we are so thankful we were the recipients of their hard work and dedication.”

This goes back to the original vision of Jamie Jarvis, who gave eight students $100 each to catch the vision of service – people helping people, and reaping the personal benefits one receives from reaching out to others.

This year 32 students participated, but the concept has caught on in different cities and even as far away as Colorado where an entire classroom will be involved this coming year. From eight students last year, to 32 this year, it seems the sky is the limit as more teachers and kids catch the vision. 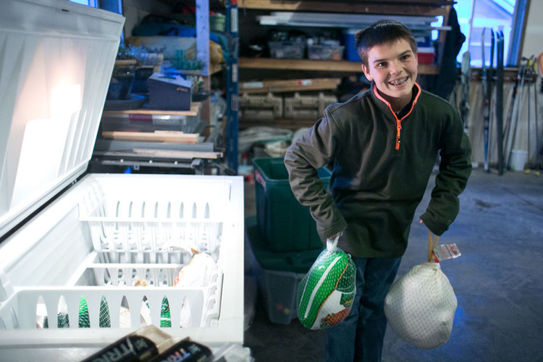 When Chellee Rice heard about the Two Roads Project, which originated in Billings, she immediately wanted to get some of her Sacajawea Middle School students in Bozeman involved. “I’ve watched these kids really find an investment in what they are doing and find passion and find a Purpose,” She said (Bozeman Chronicle, December 22, 2013).

Projects have included Darien’s who transformed his $100 into 17 turkeys and $1700, which he gave to veterans and their families for Christmas. “I thought veterans would be fun to help,” he said.

Using his creativity, Darian bought iTunes or Wal-Mart gift cards to use in a raffle at school. For a donation of $10.00, classmates had a chance to win a gift card. Darian was able to buy three turkeys and replace his original $100 with an identical amount.

From that point, he kept multiplying his funds and eventually gave each of 10 veterans and their families turkeys and $150 Wal-Mart gift cards. Quite a a successful undertaking by this service minded young man by any standard.

(Photo by Adrian Sanchez-Gonzalez of the Bozeman Chronicle)

Ellie, a 14 year old middle school student observed the devastation after Hurricane Sandy rolled up the East Coast in 2012. She knew she wanted to help but needed to find a way to multiply the $100 bill she had been given. And, she wanted to deliver the funds personally, because she was going on a mission trip to New Jersey with Hope Lutheran Church in June of 2013.

Her idea was to sponsor a pancake breakfast at the church with the $100 bill as seed money. Within a short time, classmates, her parents and church members had contributed more food making the breakfast a huge success. Ellie was able to raise several hundred dollars to give to relief agencies working in New Jersey.

A pancake breakfast worked out well for Jacques, too.  He wanted to help a Bozeman senior living facilty  purchase a new ping pong table. He was shocked when 250 people showed up for breakfast.  Nine gallons of orange juice, four gallons of syrup, twenty-six pounds of bacon and 10 pounds of pancake mix later, he had enough money raised to buy the table. In the meantime, though, he was running a bit short of supplies so his dad pitched in an additional $85.00 to make up the difference. “It’s for a good cause,” he said.   Laura Weaver, director of activities for the facility praised Jacques. “I thought it was brave of him to take on a project like this for the community,” she said.

Each student who participates in a Two Roads Project is required to file a final report with the school coordinator or his/her teacher. Following are brief excerpts from two of those reports.

Sophia and Paloma
Project: Creating a food bank at their school

We first learned about hunger in our community when our local newspaper wrote an editorial about the issue specific to our school. We were shocked and decided we could make a difference in the lives of our classmates by setting up a food pantry. The pantry is monitored by school staff and open to any student who expresses a need for food or whom staff members suspect has a need. We are raising money through family and friends, holding several food drives at our school and a neighboring school. Sustaining the food pantry in the future is important to us. We have partnered with the local Back Pack Meals/Teen Pantry Food Program which has committed to keep it running years after we have left middle school. In addition, we have asked our principal, counselor, two teachers and the school district homeless coordinator to guide the project and help us to develop a plan to sustain the food pantry over the long term.

I raised money for K9 Care Montana.  I held a bake sale and a silent auction at my grandma’s café in Shawmut, Montana.  When I was given the $100.00, I was in awe because I knew I could grow my money in the end. When I was asked to be a part of the Two Roads Project, I was all for it.  I knew it was a way for me to help my community and make a difference in Montana.  I decided I wanted to do something for veterans because my uncle is in the army and he was deployed last year.  My mom had heard about this organization called K9 Care Montana.  What they do is give a dog to a wounded veteran.  I emailed the director and while I was fundraising we kept in touch.  I ended my project by raising $71 5.00. The money went to the K9 project and will be used for training the dogs and for buying  food and supplies for them.  I learned that the smallest things can make a great impact on a small community.  Just from taking $100.00 and making my final total $715.00, I learned a little can go a long way and that nothing is impossible.

CLICK HERE TO DONATE TO THE TWO ROADS PROJECT