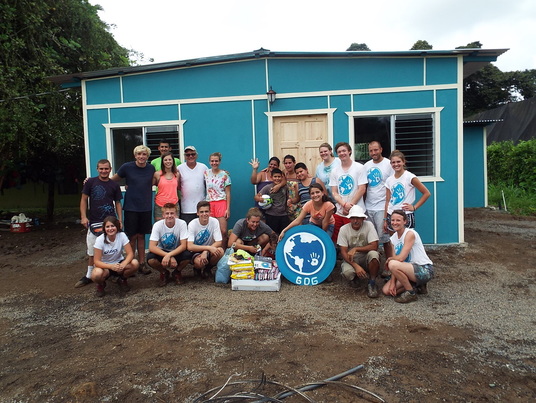 During this trip to Costa Rica each and every one of us were able to experience many things. Many of the things we saw, felt, heard, and tasted would never be accessible to sense anywhere within the states. Such things like fruit coming straight from the tree, a constant and heavy rain, or the wide variety of animals. But, fortunately for all of us, we were able to create something here within Costa Rica that can be recreated anywhere. We built not just a home for a lovely family, but created our own community of gringos. Very few people knew each other at the beginning of the trip and even less got a good nights sleep before flying out. Thus creating a new honest way to meet people. Everyone started their day out extremely tired and a bit loopy, and it only got worse as the day went on. I think in this process we were all able to see each others true personalities. It was quickly summarized that the personality and chemistry fit almost immediately. All it took was a very long day, several hours of sitting, and a shared belief that we were about to do something amazing. With this we were able to create a sense of family and caring for one another that I found to be incredible. I believe it is rare to find a group of people who can come together so fast, when we all started so far apart.
Building the house has been an unforgettable process as well. Many of us struggled with the language barrier that took place day after day on the worksite. And as one of the fellow scholars pointed out, the only people who knew how to build this house spoke Spanish, but it is still being built. Our group of fourteen people, give or take, not including the Tico's, were able to build this simple home in less than a week. I find this to be absolutely amazing, and would strongly recommend that anybody with a similar opportunity take it. I can guarantee it is an experience that will stay with you forever. I know it has a very special place in my heart. The connection made between my peers was fantastic and much better than I could have ever hoped for. But the connection with the local family, even with a lack of a similar language, was even more incredible. Looking into their eyes I was able to see their thankfulness, experience their happiness, and know that language is only a small barrier between to different people.
The learning experience that took place throughout the trip was unbelievable. Far from schoolwork; knowledge was gained to a great extent. Many of the people who came from the states lacked visual representation and a satisfactory definition of the word poverty. They were shown that to live in poverty doesn't mean sadness. The people in Costa Rica are some of the happiest people on the face of this Earth. They learned that some of the large pleasantries in life are often taken for granted. The students on this trip learned life lessons and will take them back to the states and apply it to their own lives. Teamwork, team building, trust, communication, as well as several other lessons that help people evolve in an effort to create better and growing communities throughout their lives. Several learned things about themselves and others that will help each grow as a person. The trip provided much more than a warm feeling in our hearts. It provided us with knowledge of another world away from home and outside our comfort zones.
At the beginning of the trip all of the students were asked to give their own definition of the word "service" and label it as a noun or a verb. A general consensus was reached. It was decided we would label service as a noun and define it as a project or effort, done that would benefit both parties. As this week has progressed that word has been in the back of my mind. I still find it difficult to give a definition, let alone its part of speech. But if I were to give a meaning to a word that has so many possible interpretations it would go something like this. Service: an act that is done out of kindness, not pity, to help your common man in an effort to create something, whether physical, emotional or spiritual, that can be cherished by both parties involved. It is my belief that here, during this week in Costa Rica, this group has done a service to both themselves and the family. Both groups will never forget these days that seemed to last an eternity, but in actuality went by in a flash. It is my belief that during this trip, we have created something special that satisfies a physical, emotional, and spiritual existence for everyone. 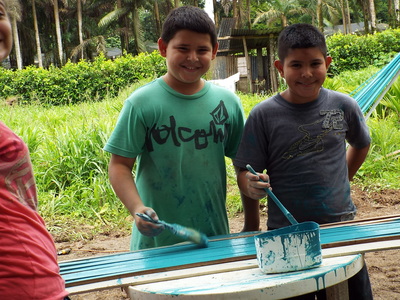 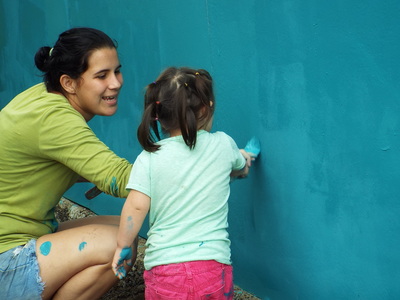 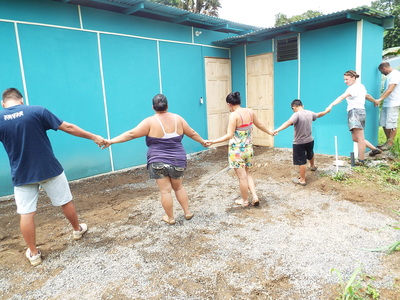 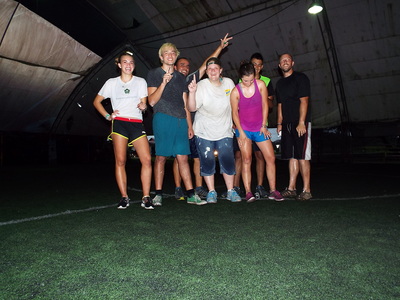 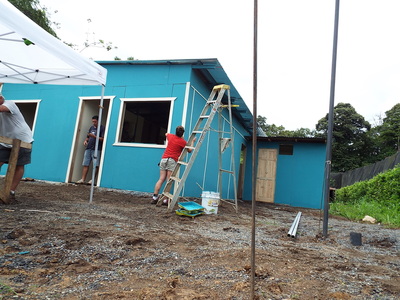 Today the finishing touches came together. As I look at the house I also look at this group, within 5 total days we have come together just like this house. Some times things are a little rough but that doesn't mean we stop. That means we work through it! I look at our first group picture and we are all afraid of each other and now we all love each other. A lot of us conquered fears this trip and lots of us did things for the first time! Zip lining, soccer, hammering, using a drill, speaking Spanish and so much more. It is truly amazing what a group can do together!

When this Global Travel trip was advertised one of the main things that stuck out to me was the zip line tour though the rain forest. Even though we did that today, and honestly it was a lot of fun, but it wasn't the best part of my day. The best part was when we finished the trim on the home and I saw the smiles on the faces of the family. It's been incredible working alongside the family to build this home.   Whether it be something little like hold a ladder, help paint, or crawl across on a dangerous roof they are always willing to give a helping hand. But not just the family the whole Costa Rican culture is super nice, even our bus driver helped build the house. I feel overwhelmed with kindness. It's almost like I'm not a tourist at all.

It's almost like I'm not a tourist at all. 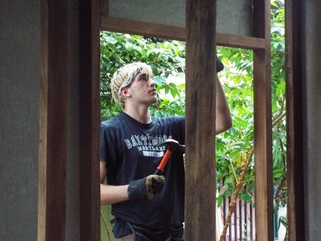 This adventure feels like it just keeps growing and growing into something life changing. I can feel my perspective shifting into something more developed. Before the trip I was a little nervous about all the work. I was worried about not being strong enough or getting tired, but now I realize that anything I do, no matter how small, is very beneficial. And even when I do get tired it's worth it. After hauling ten wheelbarrow loads of rocks to the construction site and watching a concrete slab become a frame, and a frame being covered with walls, I am filled with satisfaction. Satisfaction with the fact that I am actually helping people. I am changing lives. My heart is so full.

This is real now.

Allison Cassie talking to Finn and Cortnee as we begin our journey.
July 8, 2015 by Cortnee B.


As I sit on our first plane of this amazing trip I think about all I had to go to get here. I worked three jobs for a long time. I bake hundreds of cookies even though it feels like I baked a million. I convinced my parents that this was something I could do and would do. I did this all by myself and I could not feel prouder. This is real now. This is not just a payment or something I have been talking about. The time is here and I refuse to let anything get me down. The most memorable thing up to this point is when I found out about the family we would be helping. I learned that one of the little girls we would be helping has Down syndrome and I cried. I knew at that moment that I could help this family. I may not be a pro at building a house or traveling but I do know how to help people and especially people with disabilities. With me pursuing a degree in special education I knew at that point every cookie, every hour, and every ounce of hard work was all worth it. Today I walked into an airport with knowing only two people  on this trip. I am traveling to a country I've never been to... I'm walking in a lot of unknown but the thing I know for sure is that I am exactly where I am supposed to be!

Charlie and the Cacao Factory

You Get What You Give

James talking about his work and the bond he formed with a local builder, Mosco

Bucket list:  Ziplining through the jungles of Costa Rica – check.

Mudfest or Yo No Comprendo